Last night the Police publicised, after the respective approval of the public prosecutor, information and pictures of the two men arrested on the 5th of February in Chaidari, Attiki, with guns found in their possession. 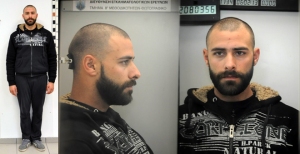 The two young men, both alleged members of Golden Dawn, were found driving their vehicle with no car plates. After they stopped them, the police discovered a ‘zastava’ type, gun and four bullets, a baton and a knife in the possession of the 27-year old man, and a knife, a baton, a pair of gloves and a full-face mask in the possession of the 19-year old man. Also, two helmets were found in the car. The police declared that their pictures were publicised in case they are involved in felonies and might get recognized by other people. Citizens are also asked to contribute to the police investigations with any useful information and contact the Security Department of Chaidari or the Police Headquarters.

At the same time in Crete a 34-years old was arrested and 10 more people are wanted for the severe injury of three young men of Pakistani origin two days ago in Ierapetra. The three immigrants are hospitalised with severe injuries on their heads and fractures all over their bodies. Their condition is estimated by doctors as critical.

Among the people that are wanted, there is, according to information, a teacher. The police consider racist motives behind the attack as highly possible because some of the suspects, as it is reported, have links with Golden Dawn.

The party of SYRIZA issued a statement about the incident and condemned it as a “murderous racist attack”.

[This report constitutes a compilation based on the following articles from the Greek press: